CHILDREN had it REALLY tough on Titanic – THE MIGHTY DATA

If you had been a child at Titanic, you would have died with 46% probability. Damn sad. Especially if considered, that total survival rate of Titanic was 39%. Contrary to (proclaimed) Ladies-and-Children first evacuation rule, there is only 15pp difference in death incidence of children compared to overall all ages combined. Had they disregarded this evacuation mantra back there?

Maybe you think, hold on, it was ship wreck on the open sea, so maybe children were not able to swim. After all, we usually learn to swim a bit later into the life. Well, the whole truth is revealed only, if you drill down the children survival rate based on class, they had been traveling in on Titanic: 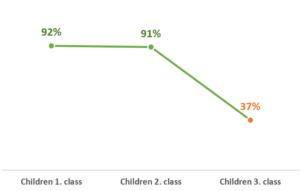 Children from first and second class had almost 3 times higher chance to survive then those from 3. class. Thus, the swimming skills were not the game there, even if you had been Mike Phepls’ son (or rather grandfather giving the year of the catastrophe).

Following graph depicts that Gentlemen from the upper class, have been not that much of the gentlemen at all: 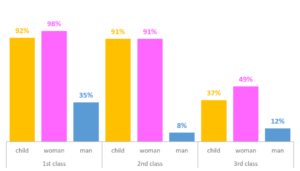 Men from first class survived in similar rate as women and children from 3rd class. Quite the contrary, the most heroic approach took the men from 2nd class, out of who only 8% survived the trip of legendary steamship. But you wonder maybe, how would we know that?

Kaggle is a web portal that organizes competitions in analysis of data. What is more, on given portal, one can find several training data sets originated for training of the analytical skills. One of these sets is also Titanic Survival dataset. (you can download it HERE, but you have to be a registered Kaggle member). This attractive dataset compiles the data of passengers on the sadly known Titanic voyage with adding parameter if they survived the incident or perished.

Using Machine learning methods (which is dataset destined for training of) you can discover how location of your cabin within ship construction or how much you payed for ticket increased or decreased your chances of survival. One can also analyze if having more relatives on the ship was competitive advantage or disadvantage in fight for life. I will not rip you off the pleasure to find all these “sunk treasures”, but would like to indicate that some conclusions are pretty sinister (as the above mentioned are).

So, do not hesitate and try easy Machine learning predictions with this super interesting dataset. Feel free to share additional findings with THEmighyDATA community in discussion to this blog. On last note: “Near, Far, Wherever you are …”, may your Machine learning attempts to be as convincing as Kate Winslet with Leonardom di Capriom were on the railing 🙂