In the field of digital technologies and data there are some conferences in Europe worth seeing. On top of that, there are a few that you can feel really be sorry if missing them. Well, and at the top of this imaginary pyramid of know-how, there is a very short list of those conferences from which you will have goosebumps still several weeks after their closing. One such conference is the NOAH conference in Berlin, which I had the honor of attending few weeks ago. More than 500 speakers (yes, reading right) in 2 days for more than 4000 people in the audience (yes, reading it correctly again) will prepare a hailstorm that you would seek to recover from longer than over evening after-party. The conference is known to leave the presenters only 6-10 minutes, so you can hear 20 – 30 unique approaches of dealing with issues in a single 3-hour block. Pure massacre. I guess that after day one you wished you would have been rather landscaping all day long.

It is not possible to pass on such an airborne attack of ideas (if for nothing else, there are always 4-5 parallel streams running, so unless you have arrived as wide team, you have no chance to see all the agenda). However, I will try to convey to you at least the coolest thing that our team saw into a three-parts-long blog.

In following section your jaw might struggle to bounce back from the dropped position because the paths to success, chosen by the below listed companies, are not only brutally functional but also unconventional on top of it. Well, see for yourself: 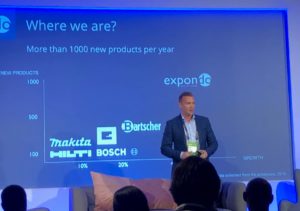 Expondo, as company name, will certainly not ring the bell with you. That is so, because it is precisely part of their strategy. Nevertheless, even over our ignorance, they are market leader in the production of professional poppers, micro-scales (among others allegedly used also by drug cartels) or other niche products that you might not even realize that exist. In everything they produce, they strive to be in the world’s top 3. Ehm, yet another niche, no-name business, you might think. The “problem” is that Expondo launches annually more than 1,000 (!!) new products. That is, about 5 news items every working day. What is more, only 4% percent of their releases will not turn into world-wide hits. Having a niche, inconspicuous products, they manage to produce and sell these products with a (whooping) 56% margin. So just to summarize: Do you know any other company that launches 960 world-successful products per year and sells them with margin equal to half of its revenue?

The fashion (clothing) market is rather tight. Thus, looking for a new, unique approach to business strategy resembles famous needle in a haystack. Though, OUTFITTERY.com has found its way through  rain-forest of other clothing retailers. They bet is a private label constructed purely on data basis. Collecting about 50 dimensions on each product and more than 200 data features about each client (which would not be so shocking by itself, Telcos hold thousands data points per client) gives this e-retailer chance not to leave its clients “wandering around” on the internet. Unbelievable (almost) half of all purchases originate directly from the portal’s recommendation. The 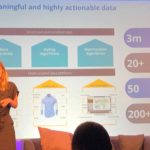 underlying data analytics engines are so well-tuned that from over 1 million clients portfolio, incredible 40% of customers are so satisfied with what Outfitters have recommended to them that they choose to activate subscription. This works by sending items on a monthly basis that they have never seen before nor indicated any preference for them, yet they like them so much that they keep them. Clients have literally outsourced their wardrobe to the e-shop. And all this is happening in so taste sensitive and demanding industry as fashion is.

Did you know that there is a separate spice e-shop? Well, nowadays we are used to having a dedicated E-shop on everything, so the very existence of JUST SPICES will probably not surprise you. On the other hand, what raises the quills is the fact that this portal has taken on the task of bringing emotions to the spice purchases. Surveys among people have found that many shopping for spices compare to buying socks: “You choose to buy them only when you run out of them and just because you need them”. Approach they used to bring soul to purchase of these (often deemed) commodities is, in fact, remarkable. For their own brand of 150 spices, they have built a strong Instagram (over 220,000 followers), podcasts and even the Influencers’ network. However, that is not the limit of their uniqueness. Since spices are still sold primarily in brick-and-mortar stores, Just Spices has managed to introduce nearly 95 different products into some retail chains, mainly thanks to 47 different (patented) ways to (witty) place spice as a complementary item in the traditional stores. 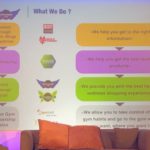 The industry, which has long been stumbling somewhere on the interface between small e-shops and (even smaller) off-line stores, is selling nutritional supplements (especially for bodybuilding or fitness). The Supplementer.com portal is a very interesting way of simultaneous (and synergistic) activity both in on-line and off-line; In addition to the private label, which is common in the industry and in CEE it is smartly operated by GymBeam (for example), the Supplementer.com has also launched several cunning ways of selling their products. The portal understood that their target group was hard to be targeted by general advertising and needs to be addressed mainly along their practicing, in the gym. However, the gyms are numerous and fragmented and often there is not much room for the placement of “own” stalls in the gym premises. Therefore, Supplementer came up with ideas like using QR walls and wending machines to overcome these problems.

Among the predominantly online-functioning portals, the NOAH 2019 conference also featured a truly traditional players. Coca Cola, confirmed that even giants can innovate. Its representatives have introduced the system developed for their drink selling partners. Using external data (such as social events in a given location, weather, competing product campaigns …) embedded directly into ordering system by Coca Cola, the application can better predict the demand for Coca Cola beverages and thus prevent demand being under-served due to low stocks. To cement the credibility of the application, the partner can review the entire history of the given recommendations (and their accuracy) for each type of partner at real stores of the providing data as the transparent partners.

If you follow the market for mobility services, names like DriveNow (from BMW) or Car2go (from Mercedes) are probably familiar to you. However, fewer people know that these hitherto competing platforms have taken an unprecedented step and merged into a shared ShareNow service. Together, in 31 cities around the world, they offer more than 20,000 cars (of one of the original brands) to unlock with mobile phones, which you can pick up at any time. Just like bike-sharing programs around the world or the newly launched Sharengo.sk service in Slovakia. The company shared interesting data by revealing that in the cities where car-sharing works, it is at least 30% cheaper than taxis. Equally interesting is the fact that the average city car is utilized only 2% of the total time. The remaining 98% of the time it is waiting for the owner somewhere in the parking lot or in garage. What is fascinating  that ShareNow’s cars aim to get their cars’ utilization up to almost 50% during the day, which means that if these services start running widely, single car-sharing vehicle can replace up to 25 passenger cars.

Even data services based on mobile operators’ data inputs are not unheard of in Europe. Instarea.com has been around for years, and has been behind several interesting studies on 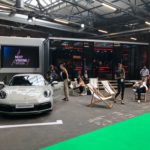 human movement. However, with the advent of new trends in mobility, these data points are taking on completely new fields of application. A much larger sibling of Instarea, the Teralytics.net, for example, has from the anonymous mobile data of moving people predicted, where is the best to place e-car charging stations (and also foresees demand for charging in each part  of the day). They are also involved in launching car-, bike- and other sharing services as they can accurately identify the need for people to move and, on to of all, also what is approximate creditworthiness of those potential clients. Perhaps the most exotic use of geo-movement  data is for planning first lines and heliports for Air-taxis, which are emerging as another form of transport in advanced cities.

An old saying preaches: If you damn good in something, you better stick to your trade. But what if you can do very well something that is not the object of your business? Portal lastminute.com, primarily providing last minute holiday deals for end customers, has found itself in similar situation. Since their whole existence is based on how effectively they can do online marketing of individual destinations and hotels, they have become a hell of a good player in that area. Instead of hovering on the ego and showing their opponents a long nose, they decided to use this ability and turn it into separate line of their business. Therefore, nowadays they run also an digital marketing agency for individual resorts taking care of their marketing presentation even outside their very own portal.

The last company in this first block of inspiration from NOAH 2019 conference is Thermondo.de. They chose an interesting goal as their mission. Aspiration is to change the traditional heat supply sector, where (often) monopoly heat utilities (either on gas or electricity basis) have only very shallow relationships with the end customers. Many consider heating simply to be a commodity. However, Thermondo, which also acts as alternative supplier of gas and electricity, builds also its own boilers. You do not need to invest in purchase of boiler, neither care about their installation or maintenance. The company will provide you with heat (in a family house or apartment) as a subscription. This includes not only the heating medium at a flat rate per month, but also the full installation of heat units, boilers or radiators hardware, even their replacement for new ones throughout the subscription period. Customers can thus afford higher quality equipment, for which they would have not only to sink high initial costs, but also hope that boiler survives till real estate divestment and that they will be able to sell it (at least) partially within the property strike price.

You have just read the first part of the inspiration from NOAH 2019 conference. You can read more fascinating information from this conference in the second or third part of this mini series.