One of the advantages of working with large (or even Big-) data sets is that you run interesting and often fun research and experiments. I came one of these opportunities when analysing data of one large Slovak corporations with customer count in range of millions. The study was organized around customer telephone numbers and has arrived upon interesting insights. After all, you better see for yourself:

Simple research question was plotted: Do Slovaks have any significant preference for digits when selecting their mobile numbers? While if some number pattern appears more often then it statistically should, it is clear, this option was actively requires by clients. So do we, Slovaks, form any distinct pattern this area?

Don’t be zero. At least at start …

Even though zero is highly regarded among blood groups (can be transferred to any other patient’s veins), this digit is not having a stellar reputation among Slovak phone users. Especially not so in the beginning of the phone number. If you look at what is the frequency of each digit in first position of the telephone number, you clearly see that zero is by far the least popular and Slovaks seem to have some kind of ZERO (and SEVEN) phobia. ON the contrary, 1,2 and 3 seem to be among the most wanted digits to start your telephone number. 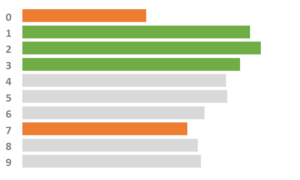 The feature gets even more anecdotal, if you understand that we “fear“ this 0’s and 7’s just in first position of the number. If you look at incidence of the each digit on 2nd to 6th place within the numbers the phobia is all of the sudden away. What is more, 0 appears to be quite popular in latter part of the number

Favourite digit? Yes, but diferent in every age

If also possible positions of given digit taken into account, Slovaks crave for having the 2’s represented in number at most. (At least one digit 2 has been selected into their number by 49%). Therefore, if you meet at least 4 people for family lunch, and everybody writes down his/her telephone number on paper, you can shine with a magic trick claiming that the figure 2 is present at least twice on the papers.

Interestingly the least popular digit in Slovak telephone numbers is digit 9. In phone numbers of our fellow residents the 9’s appear by 10% less often then above mentioned 2’s. What is more striking that these digits preference is not consistent across age groups and some age groups have different preferred digits in their phone number the others. It is clearly documented by digit preference by age clusters:

The tendency towards loving “2” and “3” appears to be prevalent across generations. But teenagers find ZERO much more cool than for mid-agers, where “0” is the least liked digit. Older generations tend to prefer “5” (may there be a connotation to Number 5 alive movie?), but younger telephonists are more than lax about it. Interesting trend that all age groups come to agreement is significant lower usage of “7”, “8” and “9.”

Mobile number as status symbol. How badly do Slovaks crave for “nice” number?

You might or might nor remember (based on your age), but when mobile phones have been introduced in mid 90’s of previous century, there was strong demand for fetching nice numbers. This number show-off has sprang out fact that in socialist time, the telephone numbers have been assigned by state Slovak Telecom operator. Having phone line wired to your flat/house was not obvious, so when the line has been installed, you cheered to be in network first place, selecting number was unthinkable. Therefore, upon mobile phones arriving, with you back then being able to pick you own number, hunt for status numbers (e.g. 999 777) has been on rise.

This is obviously one of the reasons that “nice” numbers have been swallowed and they appear not in pool much more frequently then other combinations. Slovaks indeed have an obsession for how their number looks. Just have a look how many Slovaks require their number to have following features:

In overall, more than half of the Slovak numbers have at least one form of the “nice“ number. That this is not and random phenomena, can be testes with use of Benford’s Law as well. So if Slovak is to choose new phone number, the number better be easy to remember (or at least so was the excuse commonly used for selecting status numbers 😊)

Dates are not cool at all

If people honestly would like to remember their phone numbers, the easiest would be to pick their birth date. Six-digit-form of the phone number actually offers great window of opportunity for that (e.g. 1981 3 6 or 810306 which is also form of socialist time social security number). To my great surprise, this trend has not picked up at all. We have tested the frequency of birthdays in Slovak population and then matched this to list of mobile numbers selected. The research shows that Slovaks do not chose their birthday to appear in phone number. One could object that it can be wedding anniversary or partner’s birthday to appear in the number, which would be nearly impossible to match for test. Nonetheless, the dates in general appear well below average tendency in Slovak mobile numbers. 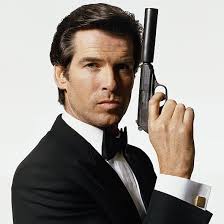 If the might of nations own secret service was determined by how many people in given nation hold agent-like number, Slovakia would be a real intelligence super power. For every 1000 Slovaks there are 41 James Bonds (having 007 as the number ending). Just for the illustration that is 4-times more than as if the people choose numbers randomly. What is interesting here that in there has been much more Bond Girls in the famous spy movies and James Bond is perceived predominantly a “mucho” character, this “spy tendency” is equally distributed among male and female in the Slovak population.

Yes, we are superstitious too

Even though we, Slovaks, tend to pick really nice number, still there is three-digit combination that we try to avoid. Devil number (666) is desirable to have in phone number for less than 0,09% of population. The fear of this demonic digit combination is also evident in comparison of other all-3-same combinations. Reviewing frequency of how often number starts with 111 to 888, it is evident that 666 combination is the least popular, even though digit “6” is rather popular among Slovaks in general. 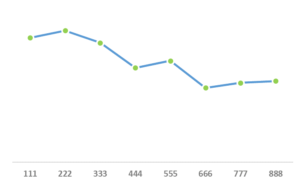 [just for explanation, using combinations 000 a 999 has been regulated by  mobile operators as they were used for different purposes, so these 2 options have been excluded from comparison]

*********    This is just one of 100+ blogs on how both funny and useful might be data analytics in our lives. Blogs have been published originally on two news portals SME.SK or TREND.SK, but since last year I publish them here on www.themightydata.com. Most of the blogs were originally written for my Slovak fellows, but I constantly work on getting the most interesting ones to get translated into English as well. If you wish to receive updates on new blog posts, do not forget to register into free MightyData community. Members of the community receive also access to presentations and locked private blogs and tutorial videos not visible to general public. If you liked the blog or you have a further question or comment, please drop me an email to info@mocnedata.sk .  *********

This blog post is (some what funny) illustration of how META DATA might have important role in analytics. Meta data are side information on form or other context of the data points. They are not intended (and not expected) to carry the relevant information (e.g. phone number of person is not perceived to be field for predicting his/her behavior), but they often have interesting analytical and predictive implications. There are more illustrations of this phenomenon in my writing, I even coined a term “data underdogs“, as they are surprisingly useful but not expected to be so. I promise to share more of the English versions of blogs on this topic soon.