What PETER SAGAN learned about his sprint from Helicopter? – THE MIGHTY DATA

Peter Sagan, the green jersey winner of several Tour de France editions, as well as ruling World and European Champion in cycling has proven plethora times he reads his rivals in the pack. However, there are aspects to his riding that even he himself does not realize. These secrets have been revealed only with help of the helicopter. Matter-of-factly not Helicopter solely, to be precise …

However well oriented the rider might be, there are facts beyond the human limits of any cyclist, if he is still to deliver some performance himself. Keep in mind that peloton counts up to 200 opponents, so to keep track of only 40 of them is already unthinkable. Even more so,  if you realize dire conditions the racers are usually to face in furnace summer or among buckets of rainfall. Therefore, for already more than 2 years the Tour de France has been invaded by BigData principles.

Event organizers established for each race participant to be mandatory equipped with  USB-key-size sensor below bike seat, that tracks and measures large set of performance parameters. Data of all cyclists are collected then in real time during the race and after (literally) eye-blink processing, the aggregated data is at disposal to TV commentators, social media teams or even wide public via means of mobile and tablet apps. The information that can be read from the sensors have been extended from last year’s location and speed valued to measures of air temperature, head win speed, or very actual  slope just being climbed in given moment. Connecting the (racing) dots can depict where in main pack  has been riding for most of the day the prominent stage winner adept or how cooperative in deed were the run-away mates in formed group.  The data imperative is underscored by fact that sensors emit data once every 5 meters of race progress which translates (given the average race speed at Tour de France) into 2 or 3 reading each second of the race!

What looks like easy cake in first sight (you stick the emitting sensor below the saddle and just tap the data stream) dturns out to be fairly complex technology-wise. One should not forget that Tour de France stages often cross deserted mountain range peeks or entrenched Alpine valleys, where there is no hope for mobile network signal. What is more, tough weather or hordes of fans along the track would make long distance Big Data collection unreliable and prone to data outage. To prevent his scenarios, emitted signal is collected first by accompanying motorbikes and support vehicles and then via the hoovering helicopter to main Data Dimension truck sitting in finish-line location.  This mobile data lab is designed to provide all the the analytical means  needed to process and generate insights from collected data points in real time. To accommodate for potential power outage risk, Dimension Data (the service provider) maintains two parallel back up teams in different countries ready to take the lead may anything happen with primary lab truck.

So what insights can spectators (and later the racers) find out from this Big Data source? Firstly, the data points reveal unique, so far unseen, distances between any two cyclists any time along the race. Moreover, you can also observe the changes in that 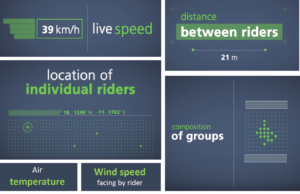 distances. Therefore, is there is a break-away from peloton, you can clearly see who to what extent was working on swallowing the breaking pack or helping them to escape. These data will glorify even more the role of domestics or disclose to what extent team leaders are enjoying the ride in the larger group. For racers of Peter Sagan style it is essential that data records depict second-by-second the acceleration of any of his rivals within sprints. Peter, thus, can review after stage what acceleration his opponents used and how long can they sustain the peak tempo. In windy stages one can easily read from the data how individual cyclists are coping with the head-wind and “how much pain” does it elude in their muscles (which might be critical for last kilometers of the stage). However, collected data are useful fot he very organizers of the tour as they data sensors measure with great precision the slope of the track and thus can offer correction to less precise measurements from the past.

For folks like us, messing around the data processing, solely the set-up of this Big Data solutions is fascinating enough. Sensors are feeding the databases literally any second of the race with 1000+ new data points that are immediately processed causing less than 1 second delay of data insights compared to actual race development. That is such a data quality, that if you plugged in the photos of racers on their bikes and images of surrounding landscape, Dimension Data would be able to create film of the stage without ever seeing the actual TV broadcast. One should realize that collected data of even greater importance to the teams themselves: If you put cyclist on stationary bike that can simulate track slope and conditions of the day, based on the data replay he could practice again and again the situations that they missed in the real race (remember P. Sagan being always second on the final stage sprints?), until they find a way how to beat them. Cycling practice can improve same way as the chess-players can replay the games to revisit certain positions. Inputs from systems, as that of Dimension Data, will certainly revolutionize (not only) cycling sport. As result those more passionate to win get new means to train to beat the rivals. All you need to do is believe in Mighty data… And then train hard along them.

You have just completed one of the early blogs on this new platform THE MIGHTY DATA. My intention is to build community of like-minded CRM and BigData experts around the globe. If you concur that marketing topics would do with a bit more inspiration or you are just reckless trend spotter,  join our community here.

!! DON’T MISS !! First 100 registered community members of THE MIGHTY DATA will receive gift of TOP 25 CRM presentation from 2016 edition of best CRM,expert conferences. Don’t miss the chance to see what they talked about.