Bread for 8 Facebook likes. You can already buy food for personal data. – THE MIGHTY DATA

Data are labelled to be commodity in corporate speak for already quite some time. Monetization (e.g. selling of) the data is not just trendy concept but turned to be essence of business for horde of smaller or medium companies. (let me name Market locator as one of the shiny examples) However, so far, the data trade has been a B2B business mainly. Ordinary person could not pay for his regular food supplies with his/her own data. That is over for good. Grocery store has been opened in Germany, where you pay for purchase solely by personal data. 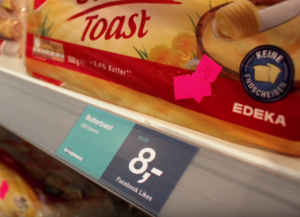 Milk for 10 photos, bread for 8 likes

No, this is not any April’s fool or hidden prank. In German city of Hamburg Datenmarkt (= datamarket) has opened its first store, where you pay solely by personal data from Facebook. Toast bread will cost you 8 Facebook likes or you can take pack of filled dumplings for full disclosure of 5 different Facebook messages. As you would expect the Grocery to, Datenmarkt ran lately special weekly action on most of the fruit with price cut down to just 5 Facebook photos per kilo. 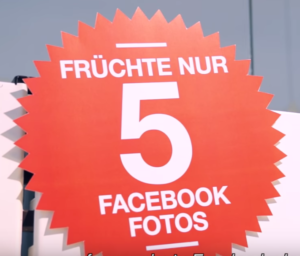 Payment is organized into similar process as you know from the credit card payment via POS terminal. But instead of entering the PIN into the POS terminal to authorize the transaction you have to log into your Facebook account and indicate which Likes given, Facebook photos posted or messages from FB messenger, you decided to pay with. The cashier receipt also showcases the data that you decided to sacrifice. These provided data are at full disposal of the Datenmarket investors to sell them (along your metadata) to any third party interested. By paying for the goods by your social data, you give full consent to Datenmarkt for this trading. 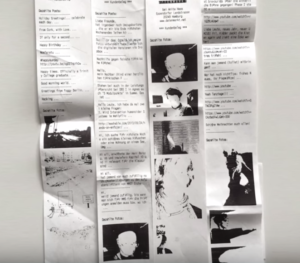 Insights we give away

What might look like elegant and definitive solution to homeless people starving has actually much higher ambitions. Authors of this project want to also raise the awareness, that in our age any data point has its value. Reminding us that the sheer volume of data we freely give away to Titans like Google, Facebook or Youtube, has actually real monetary value attached to them.

In more mature markets the echo of “what is the value of digital track of person” resonates more intensively with every quarter of they year. To put it differently, if we hand over data to “attention brokers” (as labelled them Columbia University, USA professor Tim Wu, studying the matter) what do we actually get in return for those data? We might come to the point where outstanding debt forces us not only to “smash our piggy bank” but to sacrifice our Facebook assets as well.  Most of the governments have set monetary equivalent to human life (often calculated as lifetime taxes contribution). But value of our digital life remained still to be added. Bizarre? Well, not any more in our times.

Food Yes, but not for the services

The opening of the Hamburg Datenmarket, , sadly, confirms the hypotheses researched by behavioural economists for more than 5 years. In monetization of their data people simply tend to stick to same principles as by sweets (or other tiny sins). Immediate gratification wins above promise of some future value. Most of the citizens comprehend that their personal data might have some value. If given the option of using the personal data to get cheaper or better services (e.g. insurance or next haircut for free) soothing up to 80% of them turn the offer down. However, if the same people were given choice of something tangible immediately, they were willing to trade their personal data for as trivial things as one pizza. 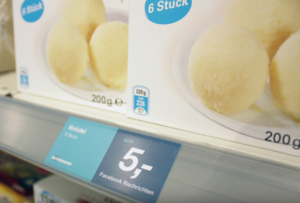 Now your thoughts go: “Wait, but the above mentioned digital giants are not offering anything tangible, all of the Google, Facebook and YouTube business is in form of the services, isn’t it? And you may be right but the point here is that all of them offer immediate gratification. (immediate likes on Facebook, hunger for quick search on Google or immediate fun with YouTube videos.) Quite a few people would see turning their digital data (deemed to be as material as air we breath in and out) for something consumable as “great deal”. If this trend confirms to be true, it is likely that service exchanging yogurt or ticket to concert for our personal data will be mushrooming around. If you have similar business idea in your head, you better act on it fast. Commission for themightydata.com portal for seeding this idea to your head remains voluntary for you 😊.

Immediately after roll-out of personal data payment for existing goods, there will be someone willing to give you goods for personal data loan (or data mortgage). In other words, you will hand over your author rights in advance, even before the content is created. For those in financial difficulties this still might seem more reasonable option to give away than fridge or you shelter. But here, we are already crossing the bridge to digital slavery of a kind. Keep in mind that the most vulnerable would be the young lads, still having long (and thus precious) digital life ahead, but short on funds to (e.g. by new motorbike) in this life stage. The whole trend will be probably infused by some industries (like utilities) that long the data to be their saviour from recent misery of tiny margins.

Soon we shall expect that besides Bitcoin, Ethereum of Blackcoin fever, person would be able to mine (from own Facebook account) the currency like FB-photoCoin or FB-LikeCoin. Ans our age will gain yet another bizarre level on top. Just imagine the headlines “Celebrity donated to charity 4 full albums of her Facebook photos? But, nobody can eat from that? Or can he now?

What PETER SAGAN learned about his sprint from Helicopter?

CHILDREN had it REALLY tough on Titanic